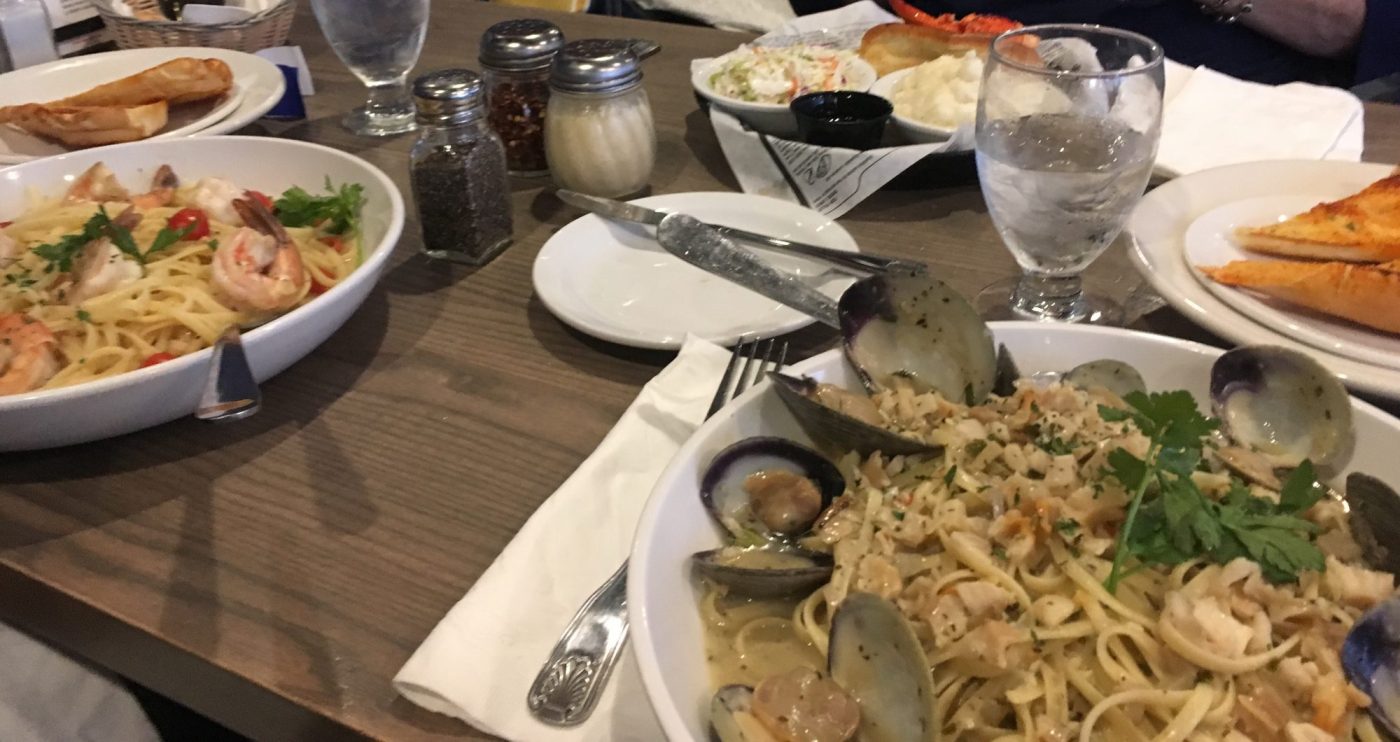 If someone told me that a touristy restaurant on the beach in Warwick had some of the best food in Rhode Island, I’d tell them to shut the front door. But it turns out some tourist traps are complete treats!

I wanted to make sure my mom got as much seafood as she could eat while she was visiting recently. One day during her trip, we did a crumby-weather-movie-day with my best friend, Robyn. The plan was to find a good seafood place close to the movie theater and have a nice dinner together.

We arrived for an early dinner, which meant we got to see the beach at sunset. The restaurant has a prime location and we had a little bit of a wait for our table, so we did a short stroll on the boardwalk.

We were seated at a spacious booth in a large dining area that had tables for small groups and large groups (it looked like a family of 15 was sitting next to us). The restaurant also had bar seating and high top seating. Our server was incredibly friendly and the atmosphere was surprisingly relaxing. Iggy’s seemed a lot more like a local, family restaurant than a gimmicky attraction.

We ordered and enjoyed the environment, taking note of some really amazing dishes that the servers were walking by with. Did we miss something about a family-style option with giant portions? We sure didn’t! When our food arrived, we were shocked at the serving size. Robyn and I each had a literal pound of pasta on a plate I could barely wrap my arms around.

I got linguine with clam sauce, which was a perfect choice. It. Was. Amazing. It was covered in delicious white wine sauce, soaked in garlic, and it came with so many clams–more than I’ve ever seen in a restaurant order. Each of the pasta dishes came with delicious garlic toast, which I promptly dipped into the amazing sauce on my pasta. The clams were fresh and perfectly cooked. I was also able to take more than half of my meal home with me. I ate it a few days later and it was honestly one of the best “leftover meals” I’ve ever had.

After dinner, we split a scrumptious chocolate cake. I’m not a huge fan of chocolate desserts–I prefer vanilla-based ice creams, pies, and fruity breads. But this cake was excellent. It was dense, sweet, and giant.

I highly recommend Iggys Doughboys and Boardwalk and I look forward to trying some other Iggys locations. Maybe I’ll go for some ice cream on my next visit to Warwick!